Rene Yuliy was born in Bulgaria. She graduated and specialized Opera singing and  Music Business at the National Music Academy, Sofia. Her studies continued under the guidance of Tamara Gorinova and Peter Berne (Austria).

Her debut on stage was in 1997 with the role of Rosina, “Barbiere di Siviglia” in the State Opera of Burgas. In 1999 she became a soloist of National Musical Theater in Sofia and in the following years she was invited to participate in different tours in Austria, Germany, Italy, Belgium, USA, Denmark, France and Greece.

Her activity as a manager began in 2004 when she took part in the organization of an opera tour in the ancient Greek theaters in Italy.

In 2009 Rene Yuliy created the first private classical ballet company in Bulgaria – Sofia City Ballet. In the company have been involved selected dancers from the theaters in Bulgaria, Romania, Ucraine, Russia, Macedonia, Italiy, Cuba and other countries. 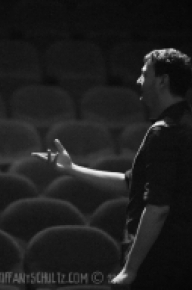 Yordan Krastev is a graduate of the National School of Dance Art, of the class of Peter Koldamov.After his engagements in the Varna Opera for several seasons he joined the ballet troupe of the National Opera and Ballet. Together with the creative activity he continued his education and became a Bachelor of ballet pedagogics and Master of ballet stage direction.

Yordan Krastev was one of the most striking prominent soloists of the Sofia National Opera and Ballet. He interpreted in an unforgettable way the roles of Drosselmeyer in "The Nutcracker", Fairy Karabos in “The Sleeping Beauty”, Mamma Simone in "The Badly Guarded Girl", Rotbart in "Swan Lake", Espada in "Don Quixote" and many others. He gave guest performances with great success in Italy, Germany. Greece and other European countries, as well as in South America, UAE, etc.

His appearances in contemporary choreography were successful, and in 2004 he was honored with the award of the National Competition "Atanas Petrov". Together with his artistic activity, Yordan Krastev teaches at the National School of Dance Art, Sofia.

In April 2013 he staged the ballet “Don Quixote” especially for the tour in UAE, which passed with great success and was nominated the best performance of the year.

In April 2014 Yordan Krastev staged a new Swan Lake especially for the tour of Star City Ballet in South Korea. Again in 2014 he has cteated a new and very unusual choreography of Sen Sans' "Carnival of Animals", which is presented with great success in different cities in Bulgaria.

In April 2015 Yordan Krastev staged one of most popular ballets - Sleeping Beauty, especially for the tour in Rome.